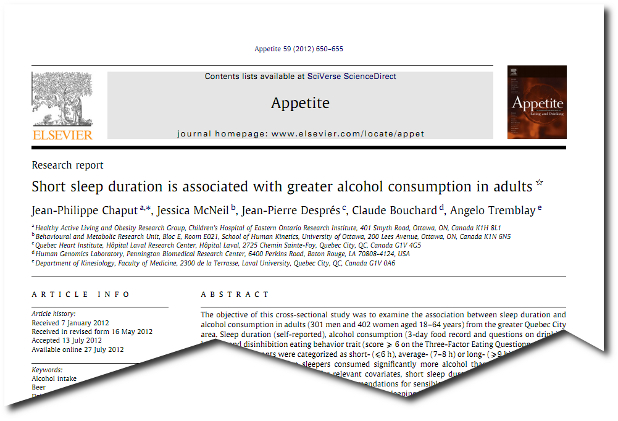 Dr. Jean-Philippe Chaput (Junior Research Chair) has co-authored a paper, “Short sleep duration is associated with greater alcohol consumption in adults,” that was recently published in Appetite. Citation details are below.

ABSTRACT: The objective of this cross-sectional study was to examine the association between sleep duration and alcohol consumption in adults (301 men and 402 women aged 18-64years) from the greater Quebec City area. Sleep duration (self-reported), alcohol consumption (3-day food record and questions on drinking habits), and disinhibition eating behavior trait (score >= 6 on the Three-Factor Eating Questionnaire) were assessed. Participants were categorized as short- (<= 6h), average- (7-8h) or long- (>= 9h) duration sleepers. Overall, short-duration sleepers consumed significantly more alcohol than the two other sleep-duration groups. After adjusting for relevant covariates, short sleep duration was associated with an increase in the odds of exceeding the recommendations for sensible weekly alcohol intake of 14 drinks for men and 7 drinks for women compared to those sleeping between 7 and 8h (OR 1.87, 95%CI 1.03-3.54, both sexes combined). In both men and women, daily alcohol intake was significantly higher in short-duration sleepers having a high disinhibition eating behavior trait. However, the prevalence of a binge drinking occasion (i.e. >= 5 drinks on one occasion) was more common in men than women. Men sleeping less than 6h per night with a disinhibited eating behavior were more likely to report binge drinking (41% of them). In summary, the combination of short sleep duration with disinhibited eating behavior is associated with greater alcohol intake in adults. 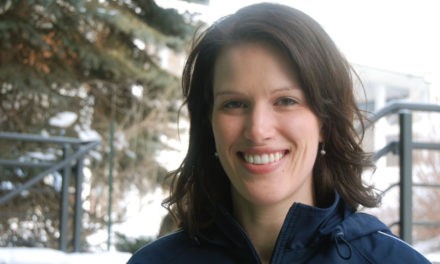