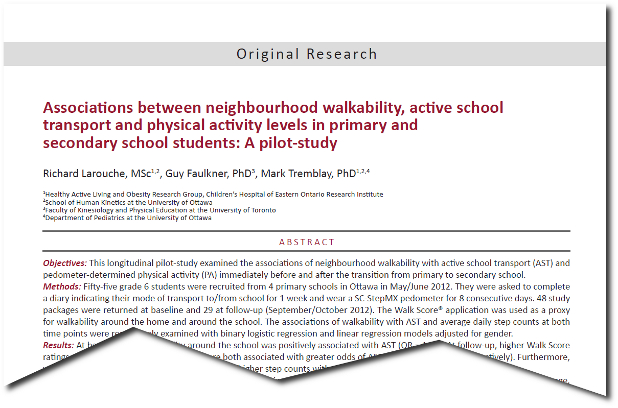 PhD student Richard Larouche and HALO Director Dr. Mark Tremblay have co-authored a paper with Dr. Guy Faulkner, “Associations Between Neighbourhood Walkability, Active School Transport and Physical Activity Levels in Primary and Secondary School Students: A Pilot-Study,” that was recently published in the University of Ottawa Medical Journal. Citation details are below along with a summary of the paper.

ABSTRACT: Objectives: This longitudinal pilot-study examined the associations of neighbourhood walkability with active school transport (AST) andÂ pedometer-determined physical activity (PA) immediately before and after the transition from primary to secondary school.Â Methods: Fifty-five grade 6 students were recruited from 4 primary schools in Ottawa in May/June 2012. They were asked to completeÂ a diary indicating their mode of transport to/from school for 1 week and wear a SC-StepMX pedometer for 8 consecutive days. 48 studyÂ packages were returned at baseline and 29 at follow-up (September/October 2012). The Walk ScoreÂ® application was used as a proxyÂ for walkability around the home and around the school. The associations of walkability with AST and average daily step counts at bothÂ time points were respectively examined with binary logistic regression and linear regression models adjusted for gender.Â Results: At baseline, only walkability around the school was positively associated with AST (OR = 1.04). At follow-up, higher Walk ScoreÂ ratings around the home and the school were both associated with greater odds of AST (OR = 1.12 and 1.29 respectively). Furthermore,Â walkability around the home was associated with higher step counts with a large effect size (Î·2 = 0.19).Â Conclusions:Â In this longitudinal pilot-study, the association betweenÂ neighbourhood walkability (as assessed by the Walk Score application)Â and measures of AST and PA was stronger in secondaryÂ school compared to primary school. This suggests that neighbourhoodÂ walkability may be more important for supportingÂ adolescentsâ€™ AST and PA levels. However, given the small sampleÂ size, future prospective studies are needed to confirm these findings. 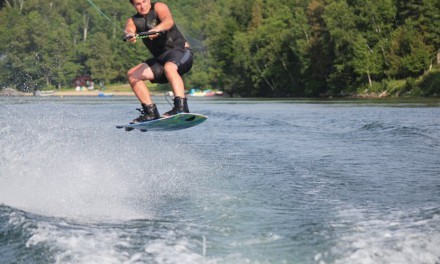