Electronic Screens in Children’s Bedrooms: Do the Number and Type of Electronic Devices Matter? 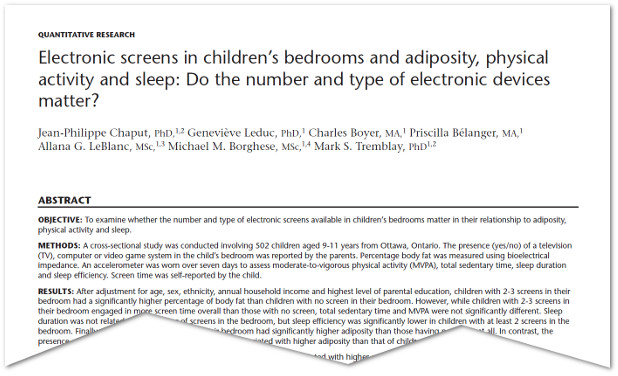 Led by Dr. Jean-Philippe Chaput, a group of HALO researchers authored a paper, “Electronic screens in children’s bedrooms and adiposity, physical activity and sleep: Do the number and type of electronic devices matter?,” that was recently published in the Canadian Journal of Public Health. Citation details and a summary of the paper are below.

ABSTRACT: Objective. To examine whether the number and type of electronic screens available in children’s bedrooms matter in their relationship to adiposity, physical activity and sleep. Methods. A cross-sectional study was conducted involving 502 children aged 9-11 years from Ottawa, Ontario. The presence (yes/no) of a television (TV), computer or video game system in the child’s bedroom was reported by the parents. Percentage body fat was measured using bioelectrical impedance. An accelerometer was worn over seven days to assess moderate-to-vigorous physical activity (MVPA), total sedentary time, sleep duration and sleep efficiency. Screen time was self-reported by the child. Results. After adjustment for age, sex, ethnicity, annual household income and highest level of parental education, children with 2-3 screens in their bedroom had a significantly higher percentage of body fat than children with no screen in their bedroom. However, while children with 2-3 screens in their bedroom engaged in more screen time overall than those with no screen, total sedentary time and MVPA were not significantly different. Sleep duration was not related to the number of screens in the bedroom, but sleep efficiency was significantly lower in children with at least 2 screens in the bedroom. Finally, children having only a TV in their bedroom had significantly higher adiposity than those having no screen at all. In contrast, the presence of a computer in children’s bedrooms was not associated with higher adiposity than that of children with no screen. Conclusions. A higher number of screens in a child’s bedroom was associated with higher adiposity, more total screen time and lower sleep efficiency. Having a TV in the bedroom appears to be the type of screen presence associated with higher levels of adiposity. Given the popularity of screens among children, these findings are increasingly relevant to health promotion strategies. 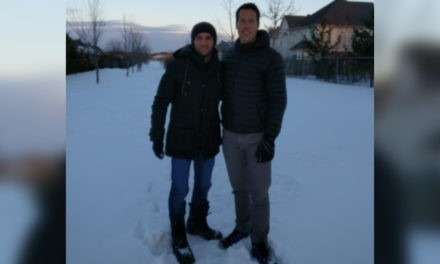