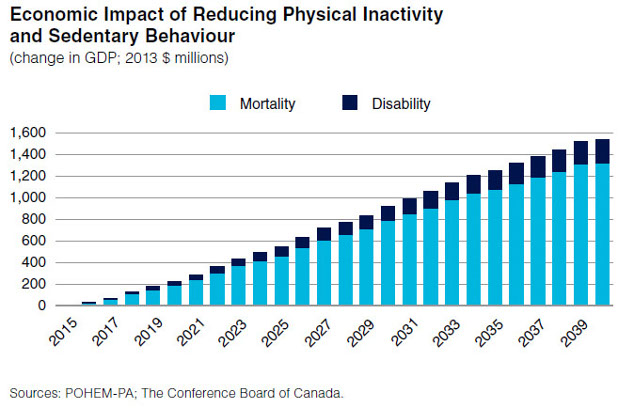 Ottawa, October 24, 2014 ‚Äì According to a report by The Conference Board of Canada, getting just 10 per cent of Canadian adults to sit less and move more would reduce Canada‚Äôs health care costs by $2.6 billion and inject $7.5 billion into the Canadian economy by the year 2040. This report, Moving Ahead: The Economic Impact of Reducing Physical Inactivity and Sedentary Behaviour, was released today with a joint media release by the Conference Board and ParticipACTION.

The report estimates that the benefits would start to show as early as 2020, if‚Äîstarting in 2015‚Äî10 per cent of Canadians sit less, walk more each week, and increase their daily physical activity.
The study found that the incidence of debilitating chronic diseases would be reduced over the next 25 years ‚Äì including 222,000 fewer hypertension cases, 120,000 fewer diabetes cases, 170,000 fewer heart disease cases and 31,000 fewer cancer cases.

As well as reducing chronic conditions, the report suggests that premature mortality would decline by 2.4 per cent by 2020 alone, representing more than 6,600 lives saved.

‚ÄúThe reduction in premature mortality and, to a lesser extent, reduced numbers of people on disability and fewer days lost to absenteeism, would mean more workers available for the labour force,‚Äù said Thy Dinh, Senior Research Associate, The Conference Board of Canada. ‚ÄúAs a result, economic activity would receive a substantial boost. Improving the health status of Canadians through increased physical activity and reduced sedentary behaviour can lead to longer, healthier lives, and the expected productivity gains would be of significant benefit to the entire country.”

The report estimates that Canada’s gross domestic product (GDP) would be $230 million higher in 2020, $931 million higher in 2030 and nearly $1.6 billion higher by 2040 ‚Äî a cumulative $7.5 billion over the full period ‚Äì with this modest increase in Canadians‚Äô levels of physical activity and their decrease of sedentary behavior.

“Canadians spend most of their waking hours sitting and get insufficient activity, a recipe for the promotion of hypertension, diabetes and even premature mortality,‚Äù said Dr. Mark Tremblay, Director of Healthy Active Living and Obesity Research (HALO) at the Children‚Äôs Hospital of Eastern Ontario Research Institute (CHEO) and member of ParticipACTION‚Äôs Research Advisory Group. ‚ÄúThese new findings show that modest, achievable changes in movement behaviours can produce substantial and important improvements in health, and should be embraced.‚Äù

“Making the effort to be more physically active and less sedentary in our busy lives can be challenging,‚Äù says Elio Antunes, President and CEO, ParticipACTION. ‚ÄúBut, you can‚Äôt deny the health ‚Äì and economic ‚Äì benefits. This research shows that real, measurable change is within our grasp. To achieve this change, we need to continue to provide and promote a wide variety of opportunities for Canadians to get active and maintain healthier lifestyles. We hope that these new findings will inspire inactive or sedentary Canadians of all ages to add more physical activity to their lives.‚Äù

Moving Ahead: The Economic Impact of Reducing Physical Inactivity and Sedentary Behaviour is part of CBOC‚Äôs Moving Ahead: Healthy Active Living in Canada research series published by the Canadian Alliance for Sustainable Health Care. The findings are being presented at the Canadian Society for Exercise Physiology conference in St. John’s, Newfoundland on October 24, and at the Conference Board’s Health Summit 2014: Aging, Chronic Disease, and Wellness in Toronto on October 23 – 24.

Check out the Conference Board’s new Physical Activity and Sedentary Behaviour Health Meter, released to coincide with the launch of this research, to find out where your physical activity and sedentary behaviours rate in one of four categories.

About the Canadian Alliance for Sustainable Health Care and its Moving Ahead Research
The Conference Board of Canada‚Äôs Canadian Alliance for Sustainable Health Care (CASHC) research series Moving Ahead: Healthy Active Living in Canada will comprise several research briefings that aim to identify cost-effective, scalable and sustainable interventions to promote and improve healthy active living. The goal of this work is to fill the gaps in knowledge and practice, and to engage government, employers, and all Canadians in working toward a culture of healthy active living.

About ParticipACTION
ParticipACTION is the national voice of physical activity and sport participation in Canada. Originally established in 1971, ParticipACTION was re-launched in 2007 to help prevent the looming inactivity crisis that faces Canada. As a national not-for-profit organization solely dedicated to inspiring and supporting healthy and active living for Canadians, it works with its partners, which include sport, physical activity, recreation organizations, government and corporate sponsors, to inspire and support Canadians to move more. ParticipACTION is generously supported by the Government of Canada. For more information, visit www.participACTION.com. 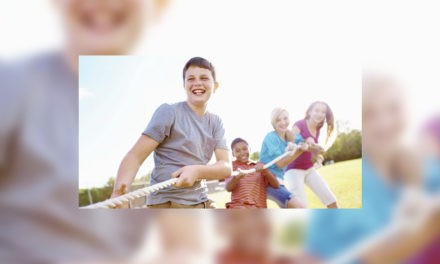