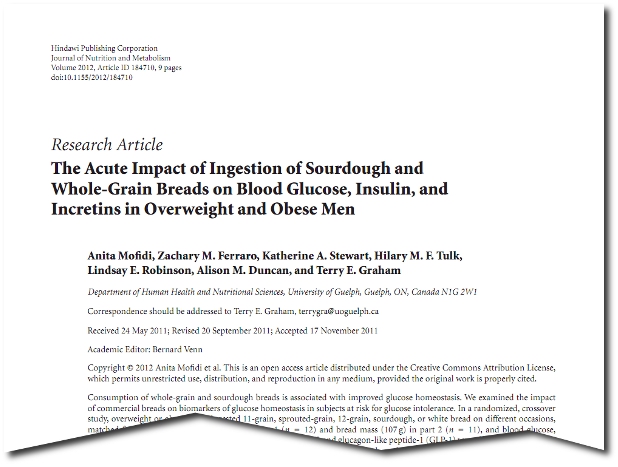 Zach Ferraro, a PhD student with HALO, recently published a paper in the Journal of Nutrition and Metabolism, “The Acute Impact of Ingestion of Sourdough and Whole-Grain Breads on Blood Glucose, Insulin, and Incretins in Overweight and Obese Men.” Citation details are below:

ABSTRACT: Consumption of whole-grain and sourdough breads is associated with improved glucose homeostasis. We examined the impact of commercial breads on biomarkers of glucose homeostasis in subjects at risk for glucose intolerance. In a randomized, crossover study, overweight or obese males ingested 11-grain, sprouted-grain, 12-grain, sourdough, or white bread on different occasions, matched for available carbohydrate (50 g) in part 1 (n = 1 2) and bread mass (107 g) in part 2 (n = 1 1), and blood glucose, insulin and glucose-dependent insulinotropic polypeptide (GIP) and glucagon-like peptide-1 (GLP-1) were determined for 3 h. In part 1, glucose response for sprouted-grain was lower than 11-grain, sourdough, and white breads. Insulin area under the curve (AUC) for sourdough and white was lower than 11-grain and sprouted-grain breads. GLP-1 response to sourdough was lower than all breads. In part 2, glucose and insulin AUC for sourdough was greater than 11-grain, sprouted-grain, and 12-grain breads. Sprouted-grain bread improved glycemia by lowering glucose response and increasing GLP-1 response. In overweight and obese men, the glycemic response to sprouted grain bread was reduced in both parts 1 and 2 while the other whole-grain test breads did not improve metabolic responses in the acute postprandial state.

A free PDF copy of the article is available for download here.

Obesity Prevention from Conception: A Workshop to Guide the Development of a Pan-Canadian Trial Targeting the Gestational Period