HALO researchers Mark Tremblay, Jean-Philippe Chaput and Travis Saunders were recently interviewed for an article published in Macleans, “Why sitting might kill you: And exercise won’t necessarily save you.”

Canadian adults are now spending about three-quarters of their time sedentary, according to Mark Tremblay, director of the Healthy Active Living and Obesity Research Group (HALO) at the CHEO Research Institute in Ottawa. A growing body of research suggests that too much sedentary time carries risks—even for those who diligently exercise. In September, Tremblay’s group launched the Sedentary Behaviour Research Network (SBRN) to study the impact of all the time we spend inactive, the dangers of which we’re only starting to understand. Jean-Philippe Chaput, junior research chair at HALO, puts it bluntly: “Independent of physical activity, sitting too much is killing us.”

According to Canadian guidelines, adults should do 150 minutes of moderate or vigorous aerobic physical activity per week, in 10-minute bouts or more. But only 15 per cent of us actually do that much, according to Statistics Canada; among that small group, many would qualify as “active couch potatoes,” who exercise for 30 minutes or so and spend the rest of their time relatively inactive. “A few [recent] studies have suggested that people who sit more die sooner, and have an increased risk of disease,” says Travis Saunders, a Ph.D. candidate at CHEO. “We’ve all been blind to it the past 30 or 40 years, focusing on the importance of physical activity. Sitting was just seen as a lack of activity,” not as an independent risk factor, as it’s now understood.

Dr. Gary Goldfield Discusses the Use of Mobile Technologies for Weight Management

Dr. Rachel Colley Interviewed on CTV News About Whether Being Overweight is the New Normal 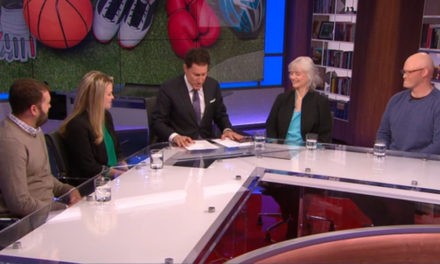