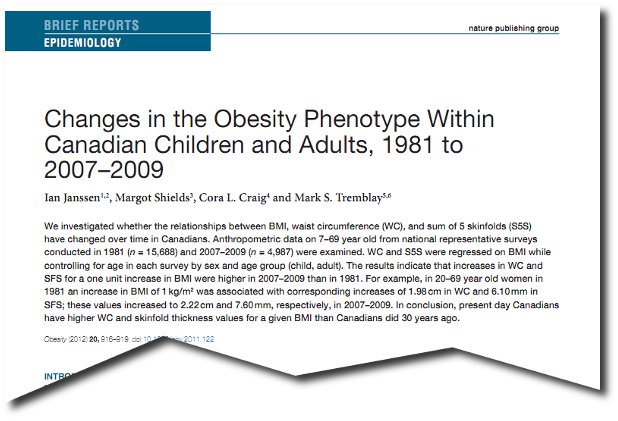 In collaboration with Dr. Ian Janssen from Queen’s University, Margot Shields from Statistics Canada, and Cora Craig from the Canadian Fitness and Lifestyle Research Institute, HALO Director, Dr. Mark Tremblay, published a paper titled “Changes in the obesity phenotype within Canadian children and adults, 1981 to 2007-2009“, in the respected journal Obesity in April 2012. The paper demonstrates that the waist circumference and sum of skinfolds of Canadians is increasing at a faster rate than their BMI, suggesting that Canadians are becoming fatter and rounder for a given BMI. These findings have implications for the surveillance of adiposity and related health conditions in Canada. Full citation details are below:

ABSTRACT: We investigated whether the relationships between BMI, waist circumference (WC), and sum of 5 skinfolds (S5S) have changed over time in Canadians. Anthropometric data on 7-69 year old from national representative surveys conducted in 1981 (n = 15,688) and 2007-2009 (n = 4,987) were examined. WC and S5S were regressed on BMI while controlling for age in each survey by sex and age group (child, adult). The results indicate that increases in WC and SFS for a one unit increase in BMI were higher in 2007-2009 than in 1981. For example, in 20-69 year old women in 1981 an increase in BMI of 1 kg/m(2) was associated with corresponding increases of 1.98 cm in WC and 6.10 mm in SFS; these values increased to 2.22 cm and 7.60 mm, respectively, in 2007-2009. In conclusion, present day Canadians have higher WC and skinfold thickness values for a given BMI than Canadians did 30 years ago.