Awareness and Use of Canada’s Children’s Fitness Tax Credit 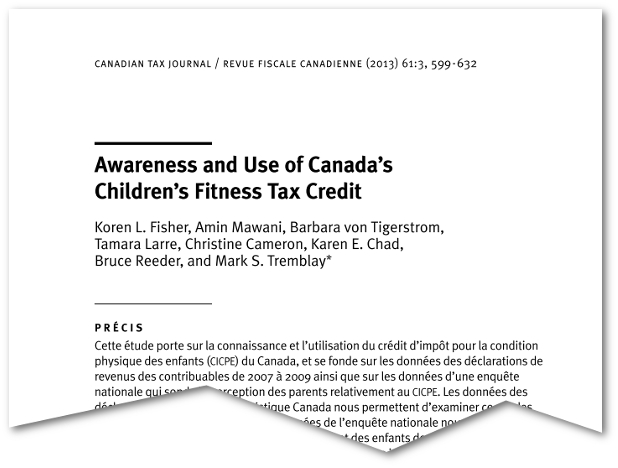 Dr. Mark Tremblay is co-author on a paper titled, “Awareness and Use of Canada’s Children’s Fitness Tax Credit,” that was recently published in the Canadian Tax Journal. Citation details are below along with a summary of the paper.

ABSTRACT: This study examines the awareness and use of Canada’s children’s fitness tax credit (CFTC), using taxfilers’ income tax return data from 2007 through 2009 as well as national survey data that explore parents’ perceptions of the CFTC. The income tax return data from Statistics Canada allow us to examine what taxfilers did, while the national survey data allow us to investigate the extent to which Canadians with children under the age of 18 were aware of the CFTC, their perceptions of its importance, and its relation to their decisions to enrol their children in organized physical activity programs. Collectively, these two data sources offer a more complete picture of who is using the CFTC and help in identifying possible reasons why others are not claiming the credit. In the analysis of the income tax return data, multiple logistic regression procedures were used to examine statistical associations between the use of and the amounts claimed for the CFTC and socioeconomic and demographic data, such as income, province/territory of residence, urban/rural residence, parental age, immigration status, family structure, gender of the child, and number of children. Our results show that families headed by a single parent, those with at least one male child, and those living in urban areas were all more likely to claim the CFTC and claimed greater amounts through the CFTC. The likelihood of claiming the CFTC was between 4 percent and 30 percent greater in families at annual income levels above $20,000 compared to those earning less than $20,000 annually. In most cases, the amount claimed also increased with increasing income such that families earning $100,000 to $200,000 and those earning more than $200,000 had CFTC claims that were, on average, $125 and $250 higher, respectively, than those making less than $20,000. We employed similar statistical methods in our analysis of nationally representative survey data, in order to calculate frequencies and prevalence estimates by participant characteristic and to test for associations between parental awareness and perceptions of the CFTC and key sociodemographic variables. Our results show that awareness of the CFTC was high, with Approximately 65 percent of respondents reporting that they had heard of the credit. Gender, age, education, and income were all significantly associated with CFTC awareness: women, parents between 40 and 49 years of age, those with post-secondary education, and those earning more than $40,000 annually were all more likely to be familiar with the CFTC. Among those familiar with the CFTC, fewer than one-third felt that the CFTC motivated them or encouraged them, or made it easier for them, to register their children in physical activity programs. Our results offer objective information regarding the use of the CFTC and raise questions regarding the equity and potential effectiveness of the program. With the spread of tax credits similar to the federal CFTC to other provincial jurisdictions, it is increasingly important to critically evaluate these programs and implement the changes necessary to address their limitations, and thereby maximize the return on this public investment. 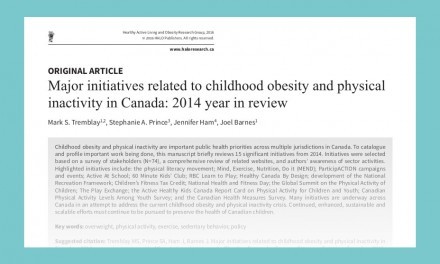 SBRN Proposes Standardized Use of “Sedentary” and “Sedentary Behaviours”